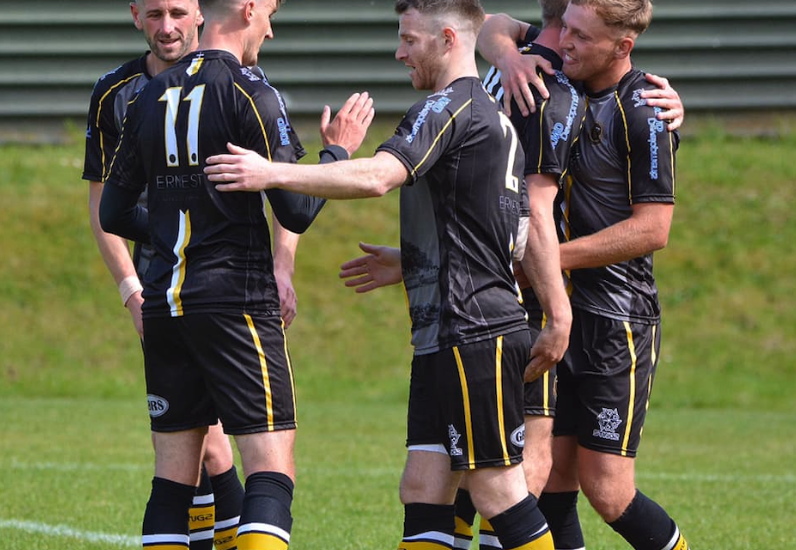 Cornwall’s international representatives stamped their authority on proceedings from the first whistle in London, with Mousehole trio Tallan Mitchell, Hayden Turner and Max Gilbert each scoring within the first 25 minutes.

Following a foul by captain James Ward (Falmouth Town), Max Oldham pulled a goal back for Kernow’s opposition, who were composed of players from the US states of Oregon, Washington and the Canadian province of British Columbia.

It proved just a minor blot in the copybook, with Gilbert restoring Kernow’s three-goal advantage early in the second-half.  Gilbert went on to complete his treble shortly after, before Harry Clarke (St Dennis) came off the bench to lob Cascadia ‘keeper James Mayo. A brace from Bodmin Town’s Dan Jennings rounded off matters late on and secured Kernow their inaugural piece of silverware.

“As a manager, you can’t ask for anything more,” Gilbert told the Voice at the final whistle. “We had a six-hour journey up here and I said to the boys when we get out there we have to press for the first 20 minutes, get those tired legs off that coach and get out there.

“They were outstanding. I couldn’t be more pleased. There are a few bits you can pick on. We could have squared to Goldy [Mark Goldsworthy] and DJ when we were in good positions but we come away from here with an 8-1 win.

“We didn’t know anything about them and they didn’t know anything about us. We said to the boys before we went out that we need to concentrate on ourselves and play the way we can play. We came out of the blocks really well and that is what we have worked on in training. We passed the ball really well and got three early goals which settled us down.

This was the first time that Kernow, who were inaugurated as members of the Confederation of Independent Football Associations (CONIFA) in 2018, had played outside of Cornwall, with their two previous internationals having taken place at Bodmin’s Priory Park where they defeated Barawa 5-0 and the Chagos Islands 10-3.

Their 16-strong squad consisted of players from across the Duchy and beyond with Bodmin, St Blazey, Falmouth, Mousehole, Newquay, St Dennis and Helston all represented, as well as Bideford, for whom former St Austell and Plymouth Parkway defender Jack Calver plys his trade.

“Coming away on the coach with the boys, you wouldn’t think that they all play for different teams,” continued Gilbert. “Mousehole, Bodmin, Bideford…the list goes on. For them, after only a few weeks building, to go out and play like they did is fantastic. Andy Graham has got a lot to do with that. I sit there and listen to his coaching side of it and I am learning a lot. I am the manager and he is the coach but we are together. Everything we decide, we do it together.

“It has been fantastic and look at some of the youngsters we have got here. I asked Wardy, Tins and Goldy to manage the youngsters and use their experience. They did and they were fantastic. Goldy was good again, although he didn’t score he got three assists. Cam Turner came off the bench with a great attitude and set four goals up.

“I couldn’t ask for a better squad. The boys deserve it as they have worked hard. We have put in a couple of stiff training sessions and they have come here, turned up and made Cornwall proud. I am really excited about what is going on here. We can only get stronger with the players we have got out.

“Everybody is saying, these teams are not as strong as we are but we are playing well and we have got a good side. We want to be tested and want to prove ourselves. We can only beat what is in front of us. As for people saying that we are not playing great sides, I disagree with that. You beat what is in front of you. We came here not knowing what we were going to face and the boys turned up and did a job.”

Cascadia, managed by Carlisle City boss James Nichols, included former Lincoln City, Hereford United and one-time Canadian international Gavin McCallum in their line-up but were blown away in the first of what is hoped to become an annual meeting of the two teams for the Challenge Cup.

This article was first seen in the Bodmin Voice newspaper on Wednesday, May 26, 2021.