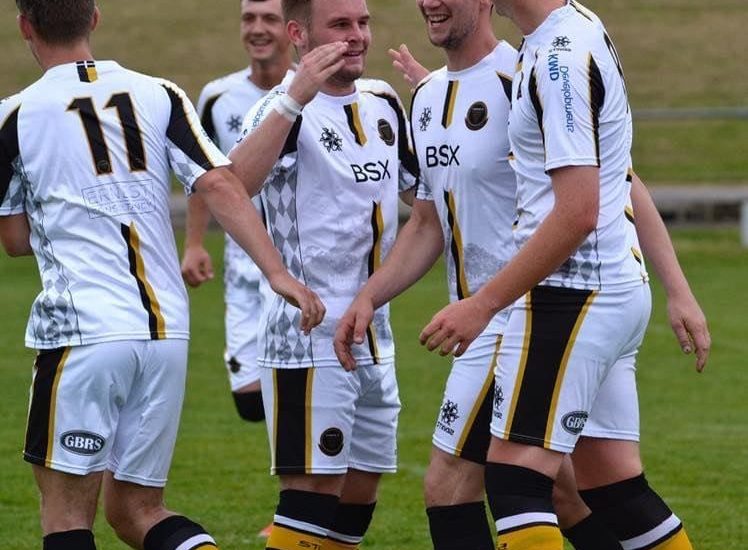 “The hunger remains the same. Cornwall doesn’t need permission to be at its best and I’m sure that will continue for years to come,” – Kernow Football Alliance chairman and co-founder, Jason Heaton.

The spring sun shines upon Priory Park’s lush green surface. The gold and black of the host’s kit glistens in all its glory. Swathes of support sing from the stand, beckoning history their way. It is Saturday, May 25, 2019 – and international football has arrived in Cornwall.

The first whistle is met with a roar of emotion as Kernow Football Alliance kick-off against visiting Barawa, ‘there to represent the capital of the southwestern Somalia state against a collection of players carrying the hopes, dreams and hunger of 11 million Cornish people around the world.

It is just six months since Kernow [the word for Cornwall in its native language] were elected to join the Confederation of Independent Football Associations – simply referred to as CONIFA – and only their third game together as a team, following two unofficial friendly fixtures against local opposition within the Duchy.

The story since that day – which ended in a 5-0 triumph for the home side – has been one of partnership, of patriotism and of pride, as the Kernow Football Alliance secured qualification to the 2020 World Football Cup (WFC), something celebrated, as the Cornish motto goes, by Onen hag oll (one and all).

“Kernow FA has, since its conception, never failed to deliver,” says chairman and co-founder Jason Heaton. “It has delivered international football and created something that even the non-football fan can get behind.

“It was always about bringing the community together, creating the right environment to thrive and co-operation, in respect of the very pillars of the Cornish way of life. This is what has opened doors to something new and exciting.”

Long has there been a movement to seek greater autonomy for Cornwall – known for its world-renowned mining prowess in the form of tin and copper, as well as china clay within the United Kingdom – similar to that seen in Wales, in Scotland and in Northern Ireland.

In 2014, Cornwall, recognised as a Celtic nation alongside Scotland, Ireland, Wales, Brittany and CONIFA counterparts Isle of Man (Ellan Vannin), was recognised as a distinct ethnic group and granted minority status under the European Framework Convention for the Protection of National Minorities.

These days, fishing, agriculture and tourism are three of the major industries in the Duchy with people flocking from far and wide to visit Cornwall’s joyous juxtaposition of coastline and moorland.

While the county’s own dialect is seeing something of a revival, fuelling the immense feeling of identity, culture and heritage within the region, it is the international language of football that is largely being utilized to take Cornwall forward.

Plans were in place, backed to the hilt by the Cornish people and endorsed by its very own Cornwall Football Association, to visit North Macedonia in the summer of 2020 – a year on from the Barawa game – to compete in the WFC as Europe’s top qualifiers.

Ultimately, the tournament was shelved due to the outbreak of covid-19 but, far from feeling sorry for themselves, time off the pitch has been spent firming up the foundations of Kernow FA.

“The time has been used to develop behind the scenes and make sure we’re ready when the time is right,” continued Heaton. “We have remained creative during a global crisis, which shows our capacity to endure and uphold the Cornish spirit.

“Now, with a director for inclusive football and at least two major tournaments on the horizon in 2021 [European Football Cup and No-Limits], we can set the bar higher than ever. The hunger remains the same. Cornwall doesn’t need permission to be at its best and I’m sure that will continue for years to come.”

The idea for a Cornish membership was first floated in December 2016 by county native and co-founder Andrew Bragg, who has followed the project through to the present day, now taking up the Alliance’s Director of Football role.

“As a proud Cornishman and having been involved in Cornish football for over 50 years, I can honestly say that Kernow FA is the most exciting and innovative project I’ve ever been involved in.

“At Kernow FA we have tried and hopefully succeeded at not only showcasing our football on the world stage but also our history. We have been amazed at the support we have received from all over the world.

“After qualifying for the 2020 World Football Cup in North Macedonia we were inundated with requests about travel arrangements so people could come and support their national team.

“We like to think of Kernow FA as an inclusive family where everyone is welcome and everyone’s ideas are important. A massive thank you to everyone who has been involved and supported us. We couldn’t have done it without you.”

The team’s head coach, Darren Gilbert, who has enjoyed unbridled success with Cornwall’s Bodmin Town both as a player, captain and team boss, described it as an ‘honour to manage and represent Kernow FA’ while some of his team went further still.

“For me, Kernow FA has been really enjoyable and I have been really proud and honoured to have played and represent Cornwall,” says midfielder, Tallan Mitchell.

“I think it has shown that we have some really talented players and coaches in Cornwall and the support we have received in our first couple of games has been amazing. I for one can’t wait for more games and to see what the future has to offer for Kernow FA.”

Team-mate and top goalscorer, Mark Goldsworthy, added: “As a proud Cornishman, it has been an absolute honour to represent Kernow FA.

“To be a part of it from the very start and watch it grow has been amazing and I cannot wait to, hopefully, be involved well into the future and put Cornish football on the world map.”