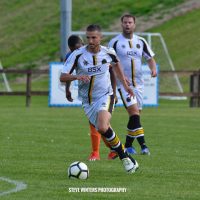 TH: Braggy tells me you two are a bit of a double act 😂 Are you okay to answer a few questions for our weekly feature article? ⚽️

TW: Ed enjoys the limelight so I’m sure he’ll be delighted to take part 👍

ET: Don’t know what gave him that impression, I can’t stand him 😂

TH: Good start, haha 👏 What he didn’t tell me was the story with you guys 😬 Have you played together at the same clubs in the past?

ET: Yeah, I’ve been lumbered with him for many a season: Hayle, Falmouth Town, Bodmin, Porthleven, Cornwall & Kernow FA

TW: Basically a decade together now! Since I moved on from Hayle, Ed has followed me to most clubs actually. Torpoint was one too far mind. First time we ever met was a training session down Hayle. I always remember Ed dropping into conversation a number of times how he was a Torquay scholar 🤢

TW: I moved to Bodmin 3 years before that Ed!

TH: So we have established there is a love/hate relationship – how does that reflect on the pitch? 😂

ET: He moans at me from start to finish 🥱 All joking aside, best mates in & out of football x

TW: For the hundreds of games we’ve played together we’ve never fallen out on the pitch once. Even giving away game changing penalties when leading in a Senior Cup semi-final are forgiven and forgotten between friends

TH: Can you describe each other’s style of play? 😬

ET: I’ll be polite…Whippy is a perfectionist, always wants to better himself and the players around him. A very intelligent footballer who has a unique way of interpreting the game. Quick, deceptively good in the air for a scrawny bloke, both footed and can play. But his step over is 🤢🤢🤢🤢

TW: I would describe Ed as a more stylish Gary Neville.

TW: That’s a compliment btw, he is England’s most capped right back. Ed has great energy, very dependable never dropping below a seven. He is solid defensively, offers good quality going forward, tactically clever BUT is petrified of taking a man on. Much like G Nev.

ET: If I was going to compare Whippy to a current pro it would be a bang average David Luiz. Fancies himself as a “baller” and can spit his dummy out if he doesn’t agree with officials’ decisions. But on his day, he can play 👏

TW: Yeah of course! When I stop playing it’ll be the friendships I look back on as the best parts of playing the game and sharing a special thing like Kernow with such a close friend is something I appreciate as being very fortunate. Football is only as fun as the guys around you at the end of the day. The better the guys around you, the more enjoyable it is.

ET: It has always been a pleasure to play with Tom. I’m very hopeful that, before we both pack it in, we will play together again.