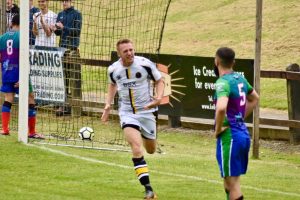 Mark Goldsworthy is the Kernow Football Alliance’s top goalscorer having bagged six strikes in four appearances – and admits he has ‘loved every minute’ of the journey so far.
Goldsworthy, who this week celebrated his 29th birthday, helped himself to a brace in the 5-0 win over St Dennis 12 months, a game which acted as a warm-up to Kernow’s maiden international fixture against Barawa at Priory Park.
The Helston Athletic striker scored again in that game, another 5-0 triumph, before netting a hat-trick in August’s 10-3 victory against the Chagos Islands. In red hot form for club and county, Goldsworthy was all set to lead the line for Kernow at this summer’s CONIFA World Football Cup in North Macedonia.
However, the tournament, due to have been Kernow’s first foray into an international knockout competition, was cancelled due to 2019–20 coronavirus pandemic and, having not been able to pull on the famous Black and Gold since the Chagos game, ‘Goldy’ is itching to get back to it.
“I was absolutely gutted about the CONIFA World Cup not going ahead,” he said. “I was really looking forward to the adventure and I really think, with the squad we had, we could have gone far. I think we would have had a real good laugh off the pitch too.
“Hopefully all the effort Andrew [Bragg – Director of Football] and Co have put in will stand us in good stead for the next one. People were really starting to sit up and take notice so if we can build up the momentum again with some games we can get the county behind us even more for the next World Cup.
“I’m a proud Cornishman so it’s an honour to represent the county in any way. To be honest, since the wheels really got in motion, I have loved every minute of it.
“Clinching qualification was a proud moment for us and obviously scoring goals will always be a top memory for a striker.”
Under the management of Steve Massey – who had quite the goalscoring record himself during a playing career that saw him represent the likes of AFC Bournemouth, Northampton Town and Hull City – Goldsworthy fired 37 goals during Helston’s ultimately fruitless chase for the 2019-20 South West Peninsula League Premier Division West title, with the campaign being expunged due to Covid-19.
“I think my goalscoring form was excellent for Helston. It took a while to get the new side settled but once Mass found a formation and a way of playing that suited us, it really helped me get in the box and get the chances to score. It was nice to be able to carry the goals over into the Kernow side. I have known Darren Gilbert [manager] for years but never played under him. Just like that he managed to bring the best out of me in regards to goals.
“The style of play really helped with the goal side of things. The one negative was that I personally didn’t feel I was involved in the overall game as much with Helston but I guess nothing beats scoring goals. It was nice to be injury free for the first time in three seasons so that really helped with confidence and momentum.
“I’ve been doing a lot of running to keep fit and Damon Mulready [a team-mate at Helston] has been setting up some core sessions over video chat which has been great. I’m trying to renovate a house from scratch so that’s just as tough physically as the core workouts.
“Mass has sorted out a video chat with the whole squad and a chap called Craig to really go in depth about not only fitness but lifestyle to keep us all ticking over during this crazy time.”