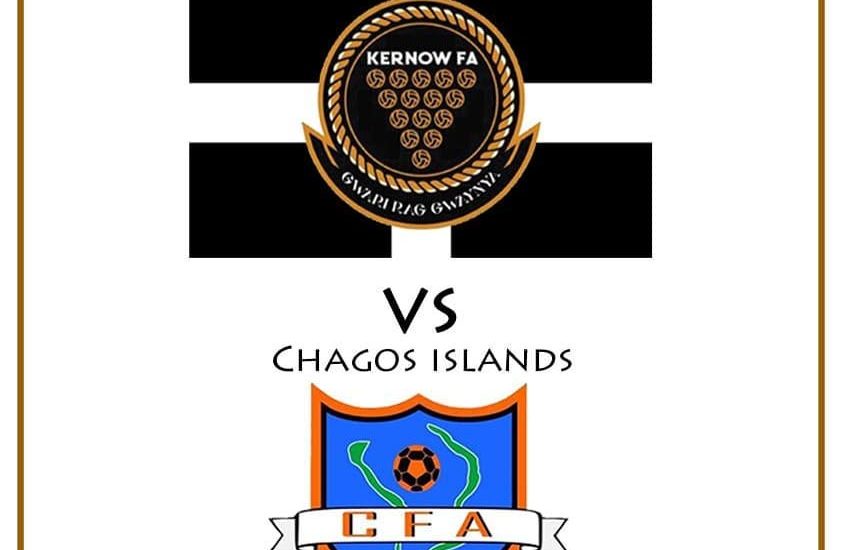 The Kernow Football Alliance and Chagos Football Association are to join forces this Sunday in a celebration of culture and diversity during a special day of events at Bodmin’s Priory Park.

The day will feature a 2020 ConIFA World Football Cup (WFC 2020) qualifier at 4.00 pm, before which the two organisations will combine for a presentation and talk regarding the plight of the Chagos people.

Back in the 1960s, the British government removed the Chagossians from their native islands in the Indian Ocean to make way for a United States military base on Diego Garcia. Chagossians continue to campaign to be returned to their homeland and for their human rights to this day.

“The Chagos Football Association began six years ago as an effort to bring together the Chagossian community in exile and as a way for us to raise awareness of our struggle,” said Chagos Islands’ Marie Sabrina Jean, whose father was taken from his home and sent to Mauritius.

“We Chagossians play as a people in exile, removed from our homeland by the British government. Now, many Chagossians live in the UK and, in 2013, came together to establish our own football team.”

“We use football as a way to talk about these issues with our fans and everyone who loves football. The team brings young Chagossians together to train and play together and, because of ConIFA, we have been able to travel and compete against other teams who have similar political struggles.”

“ConIFA has helped to raise awareness about our experience and our struggle. Today young Chagossian players are threatened with deportation by the UK Home Office because of the cruel restrictions the British Government have put on us concerning our citizenship rights, even though we are British citizens who were taken away from our homeland – which is a British territory.”

“Football has brought us together and we want to talk about our struggle and to challenge the policy of the British Government to keep us from our homeland. Please support our team and our campaign for a return.”

Kernow FA chairman Jason Heaton said: “This is a massive fixture for Kernow FA, not just about how far we’ve come and what we represent, but to get the points to qualify for WFC 2020, it’s critical as the deadline is September 31.”

“It’s a stern test of our resolve and how we can build on our relations with players, clubs, league representatives and the Cornwall County Football Association, all of which seem to be on track and certainly heading in the right direction.”

Kernow FA Director of Football, Andrew Bragg, added: “We are very grateful to Chagos Islands for accepting this fixture. We understand the fight they are going through to return to their homeland and hope in some small way to bring attention to their plight.”

“On the footballing side we’re expecting a very high pace, hard-fought match and I would like to thank so many people who have worked so hard to make this fixture possible.”

“The whole Kernow FA committee have been amazing and Bodmin Town as usual have proved very worthy hosts. Press Gang will I know do us proud by blasting out ‘Cornwall My Home’ before the kick off.”

“Also, I’d like to give a special mention to all the clubs and managers who’ve made their players available in this very busy period and to the players who have given up their precious time to represent Cornwall on such a prestigious occasion.”

“Finally, thank you to the three match officials without whom this fixture couldn’t have taken place. The squad is coming together quite nicely now and manager Darren Gilbert has pulled together a very well balanced group of lads whom, if we qualify for the 2020 World Cup, I’m sure will do Cornwall proud.”

“Here’s hoping the supporters can create a magical atmosphere and sing us on to victory.”

The gates of Priory Park will be open from 1.30 pm with all invited to visit early to hear more about the Chagos Islands, with a talk/Q&A in the ground’s clubhouse prior to kick-off followed by a press conference where members of the local, national and international media will be present.

Ticket prices for the WFC 2020 qualifier to follow are: £6 for adults (plus free match programme) and £2 concessions.

For more information on Kernow FA, or to volunteer your services and support, please email info@kernowfa.org or search @KernowFA on social media. To read more on ConIFA, visit www.conifa.org, or for the Chagos Football Association search @chagosfa on Facebook.