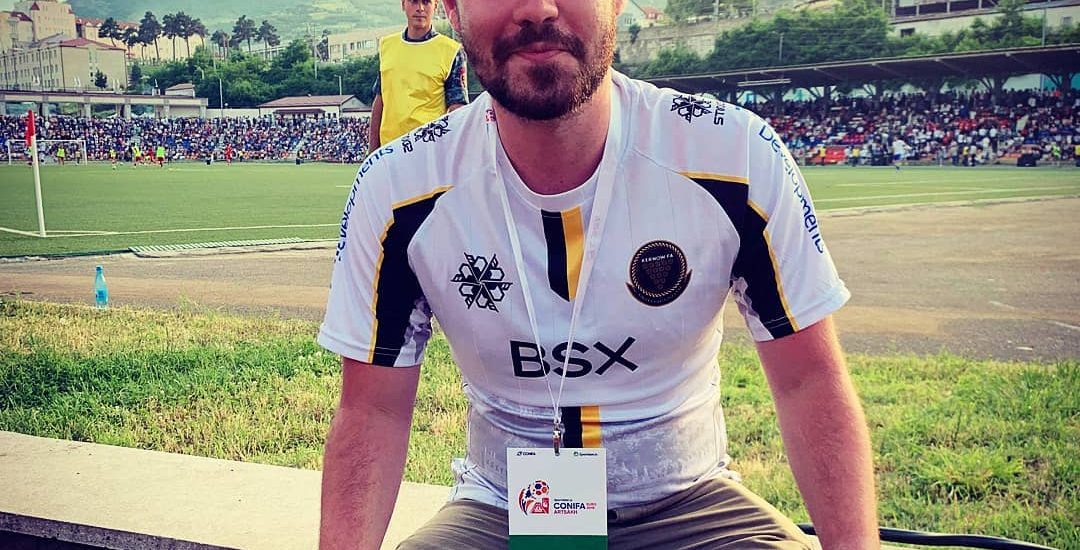 This week I’ve spent time away from Cornwall, travelling some 3,000 miles to witness the 2019 CONIFA European Football Cup in Artsakh.
Eight teams are here, all vying for the prestige of calling themselves champions of Europe, but this tournament is about so much more than just the football.
Artsakh, also known as Nagorno-Karabakh, is a disputed territory, internationally recognised as part of Azerbaijan. However, most of the region is governed by the Republic of Artsakh, a de facto independent state with Armenian ethnic majority.
This championship is unprecedented for Artsakh, both as a sporting event and as a large-scale international event.
Their Football Federation joined CONIFA – the Confederation of Independent Football Associations – in 2014 and participated in the inaugural World Cup competition, held in the Swedish city of Ostersund.
Sweden is where it all began for CONIFA, who exist as an international governing body for non-FIFA affiliated football associations, since 2013.
The global NGO supports athletes and teams of nations, de facto independent states, regions, ethnic minorities and isolated territories who are deprived of the opportunity to participate in larger football competitions.
At present, the organisation includes 54 football federations. One of the newest are the Kernow Football Alliance, who represent Cornwall on the international stage.
Over half a million people live in Cornwall and the native language, Cornish, almost became extinct in the 19th century.
Cornwall has always been a fairly isolated region, located as it is in the extreme south west corner of the United Kingdom and bordered on three sides by water.
That isolation has also long been the case for football, but Cornwall are now stepping out of the shadows, thanks to the recent founding of the Kernow FA (October 27, 2018).
They may not be here in Artsakh but, following their first international fixture against Barawa FA at Bodmin Town FC last month (an impressive 5-0 victory), are watching more closely than most, as they continue preparations for potential qualification for next year’s CONIFA World Football Cup in Somaliland – which could act as their first official involvement in a CONIFA competition.
Those who are here however, alongside Artsakh, include Szekely Land, Chameria, Padania, Sapmi, and Abkhazia, as well as Western Armenia and South Ossetia, who will contest this afternoon’s final in front of a predicted 15,000 spectators in the capital’s stadium, Stepanakert.
All of them came together for last weekend’s historic opening ceremony, entering the bowl shaped arena one by one during a ceremonial introduction.
“The authorities of the Republic of Artsakh and the Government Commission have done their best to make the championship an exciting feast for us all,” said Grigory Martirosyan, President of the Government Commission.
“By taking this initiative with CONIFA we believe that this championship will have an impact on knowing each other better, building bridges of friendship, sustaining peace and stability, also in developing sports and specifically football.”
Those targets have been met ten-fold, with some simply outstanding experiences enjoyed across the land, particularly in the four host areas; Stepanakert, Martakert, Martuni and Askeran.
In the ever changing landscape that we call home, where the political goalposts are constantly switching, CONIFA is providing a voice to the voiceless and continues to branch out further in an attempt, to which Martirosyan alluded, to break down barriers.
True, this competition has not been without its issues. Neighbouring Azerbaijan, who have not exercised political authority over the region since the advent of the Karabakh movement in 1988, have fired warning shots across the border, which only succeeded in giving a literal example of the day-to-day life afforded to these people, as well as the teams who have travelled here, in a short escape from their own tensions.
They may be new to our shores but rest assured, this will not be the last you hear of CONIFA. Those who missed last year’s World Cup in London and are new to the whole subject, may be interested in watching this afternoon’s final and the highly-anticipated closing ceremony that follows.
Surely the thousands who joined me in London last year will be watching along with them.
The action gets under way from 3.00 pm (6.00 pm local time) and can be streamed live and for free via the online broadcast platform, MyCujoo.
“Sport, especially football, is one of the unique areas that must unite populations and people, strengthen friendship and mutual respect between them, contribute to establishment of relations and much more,” proclaimed Bako Sahakyan, President of Artsakh, at the opening ceremony.
“Sport doesn’t know boundaries and restrictions, discrimination and double standards. It is a symbol of peace, where the struggle is fair and he who is prepared better wins.”
I, personally, will return with stories that can be passed through the generations. Maybe, in their time to come, an end to world conflict will be more a reality than a dream.

No comments yet
ConIFA Men News