History was made this weekend, as Kernow’s Football Alliance welcomed Barawa FA for Cornwall’s first international fixture in 60 years.

Held at Bodmin Town FC’s Priory Park, hundreds were there in person to take in all the action, while hundreds more tuned into live online coverage, as Kernow marked the occasion with a 5-0 triumph over the 2018 World Football Cup hosts.

The result, however, pales into insignificance against the overall occasion, which began with a networking event featuring local, national and international businesses.

A press conference, detailing the culture and story behind both Kernow and Barawa, was to follow before the main event – which was marked by two heartfelt anthems, with the Press Gang giving an emotional rendition of Harry Glasson’s ‘Cornwall My Home’.

With the large crowd behind them, Kernow roared into life with two goals in two first half minutes through Cameron Turner’s deflected free-kick and a cool finish from James Lorenz.

Chances came and went for both sides, with the next goal not arriving until the 47th minute, when Kernow’s current top goal scorer Mark Goldsworthy fired past the goalkeeper.

Striker partner Liam Eddy made it 4-0 with a cheeky finish from nigh on the corner flag, having caught the Barawa goalkeeper off his line before completing the scoring with his second of the evening, with Hayden Turner doubling his assist count.

The full time whistle was met with warm embraces between both sets of players and officials, with stories and characters celebrated long into the night, as Kernow officially announced themselves on the international scene – with Barawa cemented as firm friends. 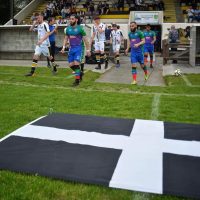