After years of neglect at the Alamzey Stadium, an odd occurrence happened in that Burco Online included an article & image from 2017 which purported to have been written out and sent in from the stadium itself. In February 2018, plans for the stadium to be renovated were announced once again.

The materials had arrived by August 2018, according to this poster on the SomaliSport forum, together with a helpful amount of materials to lay a surface at the Alamazey. The same poster also included an optimistic artist’s impression of the site, including alien species and non-vernacular architectural builds in the background : 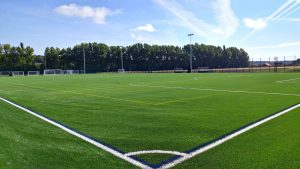 Between April & October 2018, the surface had still yet to be laid out. However by 31st March 2019, perhaps prompted by the visit from ConIFA Officials two months after the award of Hosting Rights on 27th January at the ConIFA AGM, Burco Online reported that the playing surface for Alamzey Stadium had finally been laid out.