Arguably the stadium in Somaliland which is best-suited for large crowds, outside of the capital Hargeisa, Boroma’s main playing area is unusual in that it has a field of play that has been laid out on a footprint which is much smaller than the ground within which it is situated. The Haji Dahir Stadium was surfaced for the first time with an artificial pitch, between 2016 & 2017. Sadly, however, the ground is more recognisable in its former condition. This was the occasion, which went viral after being captured by several different people’s mobile phone footage, when the stadium was the site of a pitch invasion over a hotly-disputed penalty decision.

The incident occurred during an inter-Regional game, Awdal .v. Maroodi Jeex, and led to two deaths after police opened fire on the crowd. The incident was reported by Mark Baber for Inside World Football, before being picked up by Hilraan Online. 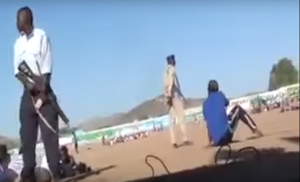 There is some terracing, along the two sidelines of the compact playing area, with the western side of the ground holding much larger banks of terraces, whilst each of the areas behind each of the goals are left clear.

Cover from the sun, or rain for that matter, is limited to a small section standing over half of the terraced bank which comprises about 20% of the length of the western sideline, on the part immediately adjacent to the halfway line. 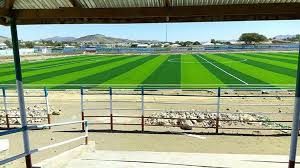